The Federal Reserve began tapering its large-scale asset purchases in November 2021, a move likely influenced by:

More than $4 trillion in capital was injected into the economy through quantitative easing (QE), over the course of the pandemic, inflation is at 40-year highs, and unemployment levels hover below 4%.

As Fed policy responds to a recovering U.S. economy, this Markets in a Minute chart from New York Life Investments shows how Fed tapering works, and its impact on the economy.

Fed tapering is the unwinding of the Federal Reserve’s large-scale asset purchases.

After the 2008 financial crisis, large scale asset purchases were introduced for the first time to inject liquidity into the market and help restore confidence. During the pandemic, they were introduced once more, at a rate of $120 billion per month.

Here’s how it works:

Notably, Fed tapering and QE is hotly debated among economists. Those in favor say QE is a critical tool for stimulating the economy. Those against say that it inflates asset prices and contributes to inequality.

The consumer price index (CPI) rose 7% in December, the highest rise since 1982. 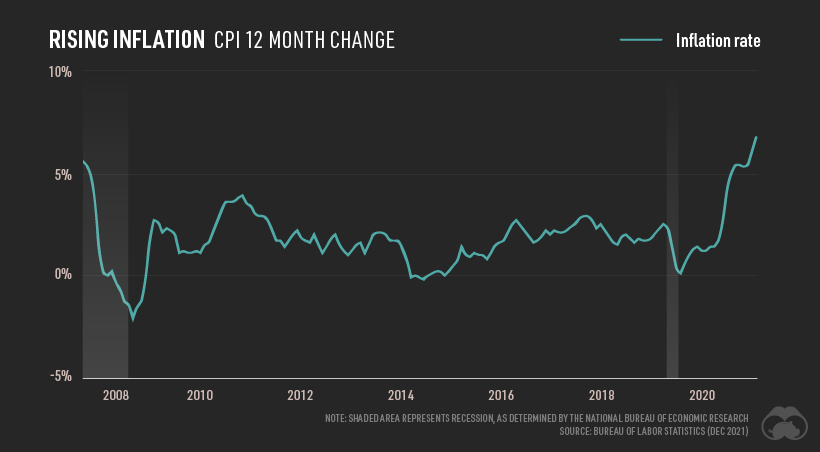 Given this increase, Lawrence Summers, former U.S. Treasury Secretary and Jason Furman, former chief economist for President Obama say that the Fed didn’t taper soon enough. Other financial heavyweights suggest this is just the beginning of a hawkish approach to inflation.

So how does Fed tapering impact inflation?

By tapering asset purchases, the amount of money circulating in the economy that can be used to borrow to buy a house or car is reduced. According to this theory, when there is less spending, inflation will gradually cool down.

The Federal Reserve has outlined that it will taper asset purchases before it increases targets on short-term interest rates. By current estimates, interest rates could rise in March.

However, if the pandemic takes a turn for the worse, the Federal Reserve can shift direction. This gives the Fed time to assess how the market and economy will react before it raises rates.

To prevent the taper tantrum of 2013, which led to market volatility and U.S. dollar appreciation, Federal Reserve chair Jerome Powell has stated that the Fed must carefully communicate the sequence of QE and tapering to prevent any fear in the market.

Like the 1940s, the rise in money growth over the pandemic has been driven by government deficits. By contrast, leading up to the 2008 Global Financial Crisis or during the 1950s and 60s, the private sector spurred loan growth.

As CPI and financial markets have soared over the pandemic, investors will be watching closely to see how Fed tapering impacts future monetary policy.